Around me I can see walls and curtains and a bed and a computer and a table and clothes. Words allow me to file away my surroundings – I’m convinced that this is normal.

But this is not normal – these objects are deeply strange – odd – space dust – clusters of information – and here I am writing about them – very, very odd.

I’ve been thinking about Gysin’s art and why I find it interesting. I don’t know what Gysin’s art means. Or I do, but have forgotten. There are clues that swim in and out of focus.

We humans are caught in language – Sassaure and Wittgenstein’s “The meaning of a word is explained by the explanation of its meaning”. 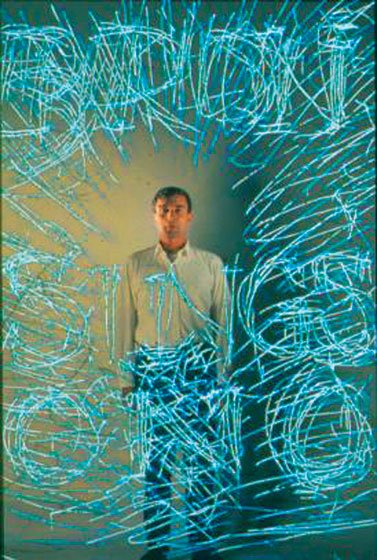 Language is self referential – a grid – a trap – purely arbitrary but extremely important – we define ourselves by it – DEFINE, by the way, is a word. (Who are ourselves? How much of us is us? What proportion is conditioning? Who’s doing the defining?)

All this stuff is easy to say – but rather like saying “I will die” we don’t really believe it – we can never appreciate it – it goes against our construction. Stop struggling and the skin of language heals quickly.

If you do want out, well what do you do? Disorder the senses? Altered states is one way – trance/drugs that let you, maybe, step outside your consciousness – write 1 to 20 and the numbers are in an unusual pattern. It lets you escape the order. The accepted common-sense order (most society order is common sense – common think – common story). Oh and learn to draw!

Escape is key and underlying all his art is Gysin’s research into the mystical (religion, scientology, control, cabalism, rituals, sigils, Sufism, making connections, the rites of Pan, Hassan etc etc). The story goes that people who could read when the majority could not have cradled their knowledge – their way out (magic) – so you get the creation of the golem by the speaking of all the points in a sphere or something. Pi or something.

Jokes are permutation (fractals?). Permutation within established order is subversion. Subversion is funny – because it lets you escape the dreary certainty of decline and death – reinforces reverse entropy, with replication = Life! Allows you to escape for a moment – the order is disturbed.

Laughter is often the physical expression/reaction to reordering – we need to be able to cope with change to survive – that’s why it’s pleasant. The only certainty is uncertainty yet we cannot cope with this infinity – we need the order to survive – yet it’s dreary. Negative capability – to hold conflicting ideas in your head at the same time. The journalist on a regional news TV programme who was interrupted by his interviewee saying “Timing” when he tried to ask “What’s the secret of comedy?”.

Spelling this out is dreary – very un-stylish and as quite a few people know – you can’t know it without being it – which is the answer I hate but it’s true – especially with the consciousness stuff. Without the experience the words are even hollow-er than usual. It’s possible to pull a butterfly to pieces – quite difficult to shove the wings back into the sockets and get it flying again. The trick is no fun if you can see how it is done. If others can see how it is done, there will be less money in its execution.

Gysin wanted out and I admire him for this – he went about it in a witty, stylish, intelligent, interesting, economic-al, with lots of personal issues, manner. To not be satisfied. Style – there’s little else worth having. Grid and sigils and time and place and hype!

You need to survive (make money in the west, soft people) and you can’t escape the flattering society narratives and aspirations – yet you don’t want unpleasant work. Is there thought after death? If you’re a coward you may not want to risk death, not quite yet.

And the urge to create is still there – so you have to find a way out of words – see Gysin’s calligraphy.

Who may run may read. You could try pulling all the angles together and making it your life. A bit risky, though.

His “I am that I am” – by writing down all permutations of the sentence – you’ve boxed in and revealed the parameters – nearly laid the trap bare. Writing allows a distance – the externalization of problems – although the map is not the territory – you can apply what you’ve learnt to the territory.

So cut up the map – disturb the order – access random – rearrange the pieces. How random is random? Time chance space?

”I may write only what I know in space: I am that I am.
Thee, Word, begat Me and this is all I know about myself at any point in space.
But the potent phrase is a word-lock of static intention; meant to keep me in my place.
Any point in space is an argument place and I will not be confined to one point, I will argue out the word-lock so that I can move.
I want to travel everywhere in Space.”

“If, indeed: In the Beginning was the Word, then, the next step is: Rub out the Word.”