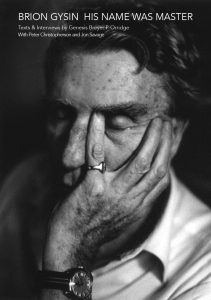 Genesis Breyer P-Orridge has been talking about the new book Brion Gysin: His Name Was Master.

In a recent interview, artist and musician P-Orridge talks about the events that led to the publication of a new book about Brion Gysin.

“Scotland Yard [police raid] took all the videos [in 1992], sadly, of Brion telling all these amazing stories about Jajouka, the Rolling Stones and the evolution of paper and all this. All gone. And then I had a box with all the cassette tapes in and some of the interviews transcribed. Then Andrew McKenzie from the Hafler Trio stole the box, the whole lot and vanished around the time of Scotland Yard so I couldn’t do anything – it was an opportunist thing.

[Please note: The book’s editor, Andrew McKenzie, disputes P-Orridge’s version of events. McKenzie is clear that he obtained the tapes with P-Orridge’s permission. I’ve spoken to Mr McKenzie and will be publishing an interview with him soon.]

“The box vanished and then about four years ago, [publisher] Carl Abrahamsson in Sweden bumped into Andrew McKenzie in Slovenia or somewhere – who had a big moment of guilt and gave it all back. And so it’s now coming out next Spring as a finished book. [The book will contain] transcripts of the edited interviews and about seven articles that I’ve written about Brion and William [Burroughs].

The book has brought back memories for P-Orridge:

“It’s like being with him [Gysin] again, it’s really cute. It’s not deep necessarily but I find that appealing. He’s not trying to be intellectual, it’s just people hanging out – with no agenda except just to think and talk and stimulate each other and I think that’s a good thing to make available right now.”

P-Orridge spoke to Douglas Rushkoff at Team Human. Rushkoff is also fundraising for P-Orridge, to help him with his leukemia.

His Name Was Master. Brion Gysin – In Memory

His Name Was Master is also the title of an article, written by P-Orridge, that appeared in Rapid Eye magazine in 1989. In the article, P-Orridge recalls his friendship with Gysin.

In 1916 Brion Gysin arrived screaming and kicking, suffering forever, he said, from thee adverse effects ov constricted vaginal muscle. Projected through a world that was like Disneyland into a world that became Disneyland, via a port ov entry charged by light. Brion travelled in time and light, and made us all cry easier than loose in our own earthbound domesticity. E am coumvinced, always will be, that Brion is, was and will be, a Cultural Alchemist. He could be so negative, stubborn and cantakerous, that screaming suicide off high buildings became more enlightening than his clammed up viscocity ov no-speak. Frustrating all attempts to a direct answer to a direct question, he would benignly draw on his kit, and, eyes twinkling, play magickal Cat and Mouse for literally hours on end. E have never met a more knowledgeable, more capable teacher anywhere, either as myth or saint, or, as in Brion’s case, as human. At thee end ov thee day he was thee only man E ever wrote love letters to. To master a long goodnight… And now, in present time. He’s not here. And it hurts. It hurts coumpletely. In thee way that sneaks into us unnanounced, cutting nerves and emotions, crippling our coumplacent daily stance and opening up our pain synapses to snapping point. 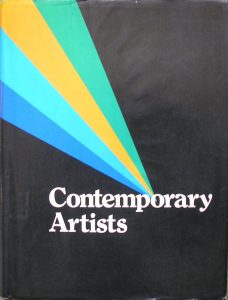 In 1975 E wrote to Brion. E was co-editor ov a reference book ov mammoth proportions called “Contemporary Artists”, and E was determined that Brion should be rightfully represented in that tome as a radical Artist and Painter. Not dismissed as an eccentric dilletanie as had appeared to have happened in thee deceptual art world. For ten yeras E had, like so many, been tracking down these renegades via deleted Beach Books, often found in Soho porn shops. Exploding with multiple recognitions ov contemporary arcane knowledge that appeared to coumfirm youthful instincts and intuitions, Brion was always thee hardest to find. He remained that way forever. He had becoum light.There was no focus, only reverberating frequencies and pulses, crystals at his centre. He had becoum, quite literally and physically, a Dreamachine that had assumed human form for thee reassurance ov us mere observers. We stare with closed eyes. He flickers bright on our retinas and generates vivid signals. E see all about Brion as Magick and Light. E re-discovered perception through him.

Out to Brion went a list ov questions about his life so far. Back came a cultured exclamation ov surprise with a note, “Even the C.I.A. don’t know this much about me”. Through correspondence we met in Paris. He would make tea in his tiny kitchen, Morroccan style. Naming thee different bubbles as thee water heated. As thee fish eyes appeared he poured thee water onto thee tea. Exploding its flavour. Thee Alchemists believe that water boils at 101°, he explained. We soon developed a tradition, chocolate biscuits and tea in thee afternoons. A small pasta meal in thee evening, with spirits to accoumpany it. Coffee later on. E would sit. Thee sound ov drumming outside thee Pornpidou centre. Flashes ov Marrakpsh. Sunlight catching thee white flowers on his table, smell ov hash smoke. Swiss Urenmachine in thee corner. Calligraphic paintings on thee easel. Notebooks in rows. Morroccan trinkets reminding me ov his influence ovpr Brian Jones. And he would talk. It was like a children’s fairytale. Thee child looking up spellbound and thee Grandfather enrapturing with his amazing tales and anecdotes. Never enough time. Yellow light cutting across thee later shadows and dreams.

April 2022: The title of this article has changed. After speaking to the book’s editor, the words ‘stolen tapes’ have been removed to reduce the emphasis on P-Orridge’s disputed version of events.

Hardback copies will only be available via Trapart Books, says Trapart.