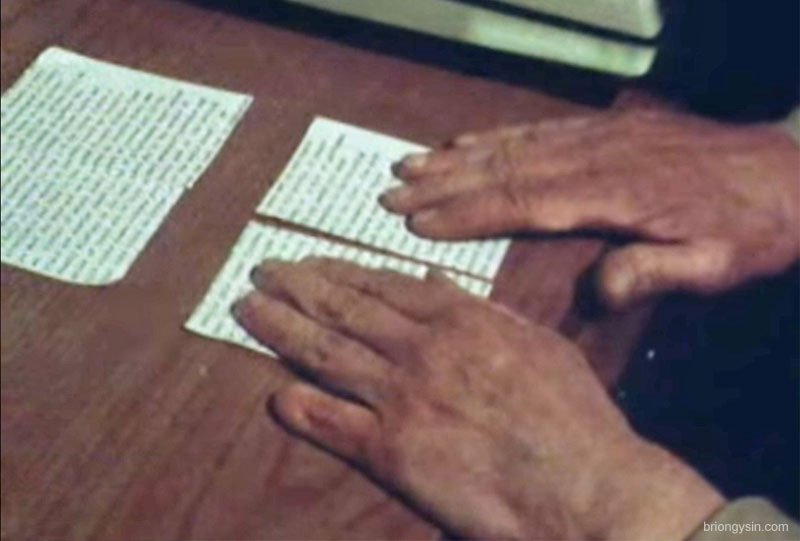 It’s said that, in the 1950s, the artist Brion Gysin was using layers of newspapers as a mat to protect a tabletop from being scratched while he cut other papers with a razor blade.

Gysin: “… I had a number of sheets of newspaper, and I took a Stanley blade and cut through them, and little bits and pieces looked so amusing to me that I started jiggling them around as one would in a collage.” Gysin had accidentally rediscovered the cut-up method, a technique that can be traced back to at least the Dadaists of the 1920s.

History of the cut-up technique

Most histories of the cut-up technique tend to focus on its emergence from the arts. For example, William Burroughs mentions surrealism in the “The Cut Up Method” (1963):

“At a surrealist rally in the 1920’s Tristan Tzara the man from nowhere proposed to create a poem on the spot by pulling words out of a hat. A riot ensued wrecked the theatre. Andre Breton expelled Tristan Tzara from the movement and grounded the cut ups on the Freudian couch.”

Writer Austin Kleon tracked cut-up ideas back to 1883, and Lewis Carroll’s ““Poeta Fit, Non Nascitur” (a reversal of the Latin adage, poeta nascitur non fit, or, “a poet is born, not made”)”:

“For first you write a sentence,
And then you chop it small;
Then mix the bits, and sort them out
Just as they chance to fall:
The order of the phrases makes
No difference at all.”

But: There is another history of the cut-up technique waiting to be written; one that explores how it also emerged from advances in information technology. Burroughs’ grandfather, William Seward Burroughs, famously perfected the adding machine – a machine for calculations that previously were completed manually. 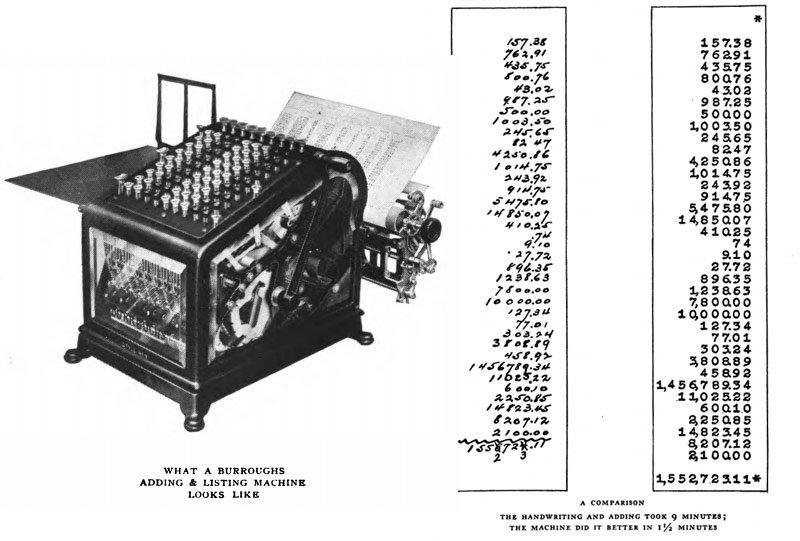 The adding machine is one of the important late 19th Century information technology inventions, alongside the telephone and the filing cabinet.

Craig Robertson, associate professor of media and communication studies, argues that ordering paper at the document level and storing it in a filing cabinet changed our relationship to information, that people came to envision information itself as a discrete thing, “Information, grasped as individual pieces of paper, became malleable, both in its physical shape and its contents.”

Robertson locates the filing cabinet in the rise of scientific management, the logic of bureaucracy.

“…and what I have come to call granular certainty, or the drive to break more and more of life and its everyday routines into discrete, observable, and manageable parts.”

Joanna Grisinger, writing about Robertson’s ideas: “Robertson focuses on how the specific mechanics of the file storage process—office workers collecting loose documents in a file folder, securely storing the folder in a vertical cabinet, and later quickly finding that folder among dozens or hundreds of other ones—contributed not just to business efficiency but also to a conception of “information” as many discrete units rather than as a body of knowledge.”

In more recent history, it’s William Burroughs who’s now commonly associated with the cut-up technique. Burroughs used it to write a number of critically acclaimed novels, and talked about the process to the media. 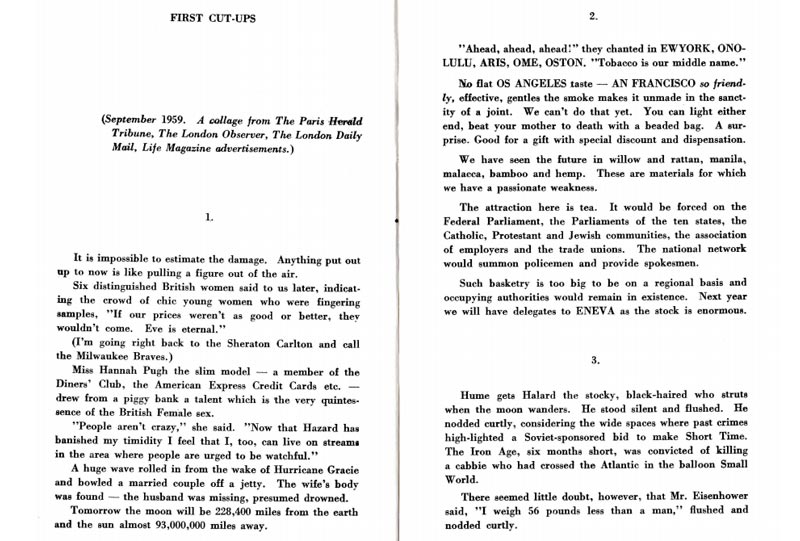 Pictured: A page from The Third Mind book of cut ups 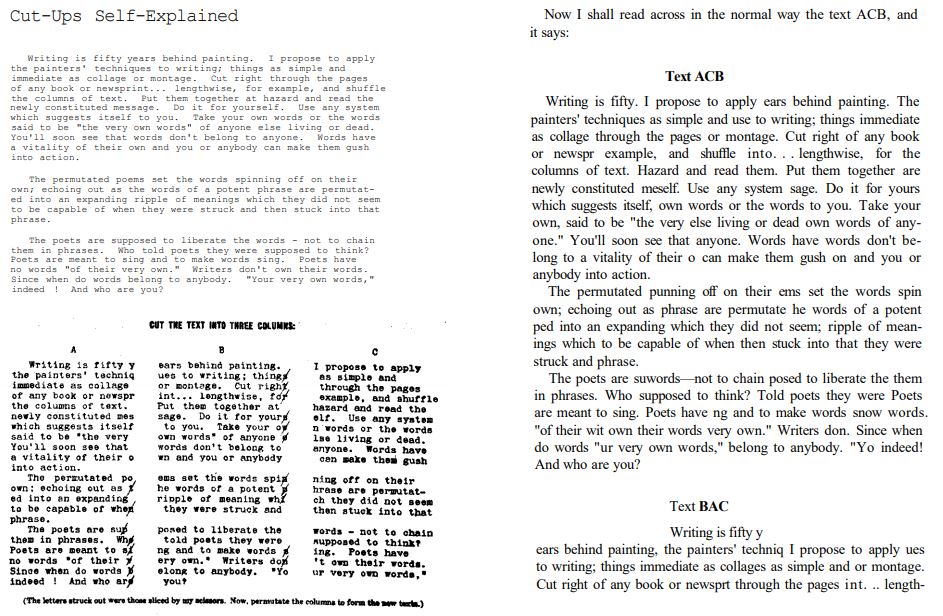 The film is non-linear. But many would describe it as deranged. When narrative is absent, the viewer has to create their own structure. The power of Burroughs and Gysin’s cut up works are entangled with their cut-up lives, and the myths of their cut-up lives. It’s said they were using a lot of drugs. Cut-up people producing cut-up artefacts. 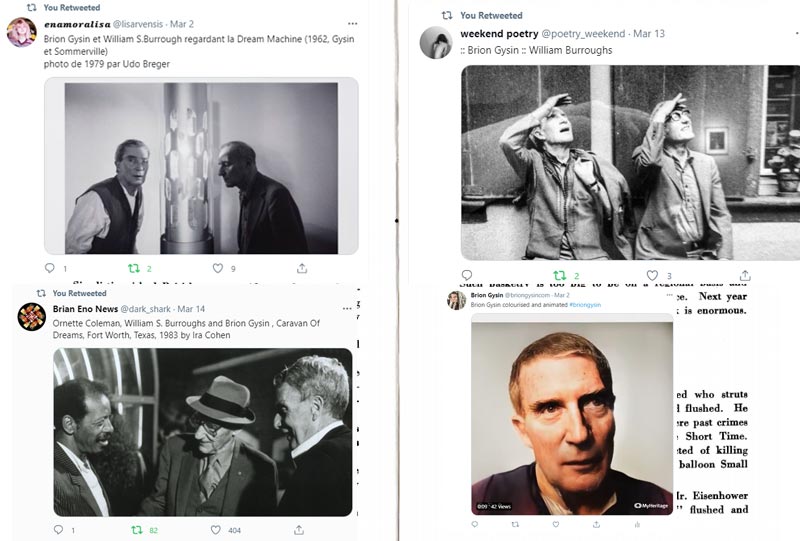 Cut up technique generators: try it for yourself 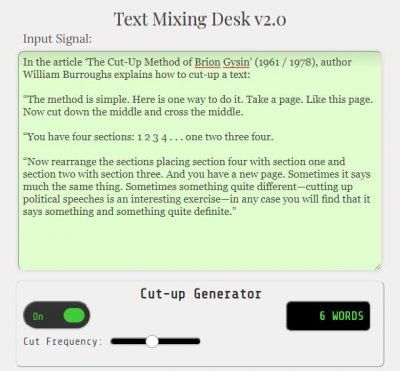 It’s no longer necessary to cut up pieces of paper to experiment with the cut up technique.
There are a number of websites and tools that offer text manipulation functionality. For example: