American novelist and diarist John Hopkins has died aged 83. From 1962 to 1979 Hopkins lived in Morocco. His impressions of the bohemian literary set he encountered during that time were published as The Tangier Diaries, in 1995. 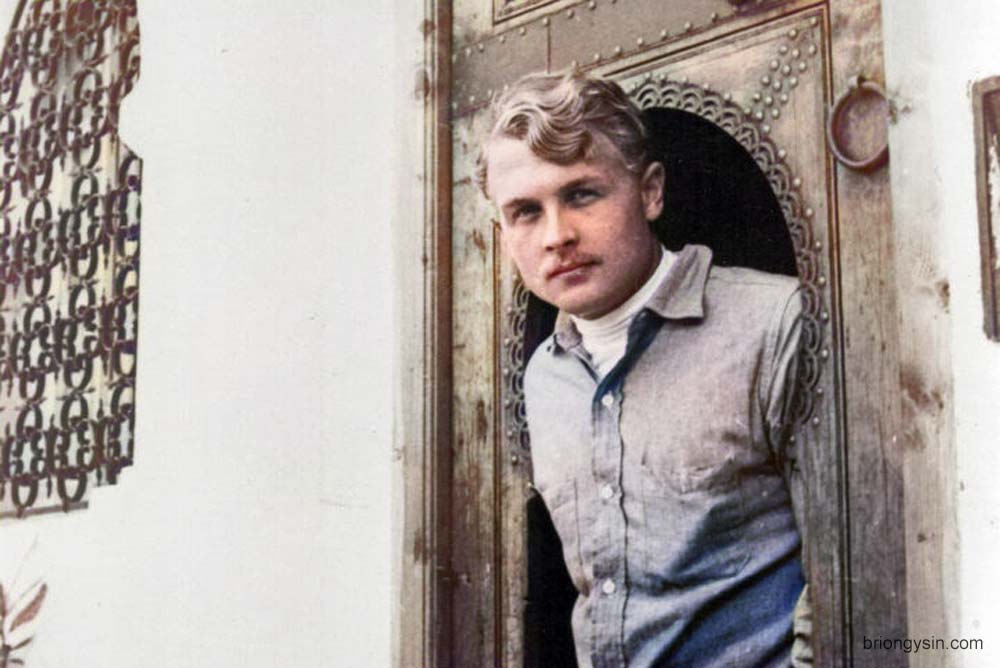 In Tangier, Hopkins knew Jane and Paul Bowles, William Burroughs, and met an entire cast of characters, from Tennessee Williams to The Beatles.

Hopkins first met Brion Gysin in the Parade Bar, Tangier, August 1964. He went on to dine regularly with Gysin, and they corresponded by letter.

In his Tangier Diaries, John Hopkins mentions Gysin many times. For example:

Hopkins:
“Brion has agreed to paint the backdrop for Paul’s play The Garden. Joe and I stretched a huge canvas—about 15 feet high by 30 long—and propped it up against the backboard on the basketball court at the American School. We bought the pigments he requested. Earth colours: yellow ochre, terracotta, brown, grey, etc., and green.

“We mixed the paints in buckets and arranged them in a row before the upright canvas. Brion had requested not paint brushes but sticks; each bucket contained the bamboo stick we mixed the paint with. At the appointed hour the master arrived. He sat down in front of the canvas and lit his sebsi. He pulled from his pocket a house painter’s brush, stuck it in the brown paint and like a bullfighter advanced upon the canvas. He made two sweeping arcs that looked like breasts. Then he made one long phallus-like slash of paint between them.

“This was supposed to be a desert scene. We wondered what he’d do next. Then he began work in earnest. Darting along the line of buckets, he picked up the sticks and started flinging the paint onto the canvas. Quickly, he developed a technique: he directed the paint in globs or spattered the canvas with a fine rain of colour.

“Before our unbelieving eyes the desert came to life. Those two mounds were not breasts or balls but dunes, not sand dunes of the imagination, but the dunes of the Sahara that I have seen with my own eyes. With a flourish of green on top, that phallic stab of paint in the middle turns into a palm tree. In a matter of minutes he covered the entire canvas with paint. There was the beleaguered palm tree in Paul’s garden and the encroaching dunes.

“We witnessed the creation of an oasis but still couldn’t comprehend how Brion did it. We marvelled at the ease, the grace, the sheer athleticism with which he brought the desert to life. The technique was carefree, but the result evoked the marching dunes that must inevitably swallow the oasis.”

Gysin was a passenger on Hopkins’ motorcycle as they drove to the Caves of Hercules.

Hopkins:
“When the truck passed, there was a loud click. I felt nothing; there had been no jolt or shock of contact; the BMW purred on through the cool night like the Titanic after it had grazed the iceberg. “Brion!” I shouted. “Are you all right?” His reply: “I think I just lost my left foot!” Incredulous, I slammed on the brakes. “Keep going!” he screamed. “Drive to the lights of the city!” I hit the gas and we accelerated toward Tangier.

“On August 30 I returned to Tangier to find a letter from Bill Burroughs waiting for me. In it he accused me of having damaged Brion’s literary career. Brion, he claimed, was a “peripatetic” writer; that is, he needed to get up from his desk and walk around for the ideas to flow. As he was now incapable of walking (and therefore of writing) he was deprived of the means of making his living. Being the party responsible for Brion’s injury, I should feel obliged to pay a heavy compensation.”

Hopkins:
“They mesmerize me. Brion says this is the way every planet in the solar system looks. In two, the land is indistinguishable from the sky. The sun (or something) is visible in the dusty atmosphere. An infinity of horizontal lines leads to the eternal horizon. A terrain that will never change. Only with the greatest effort can one force oneself to cross it. As Brion says, This is it, this is the desert, this is the universe, this is the past, this is the future, this is us.”